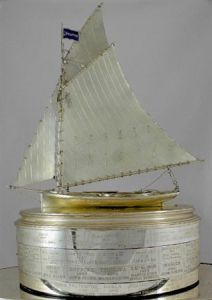 Commodore John D. Simms Jr., John R. Anderson, and Charles R. Lamphere, the trustees for the Sheridan Prize, issued the following statement in March and have posted it on the Official Notice Board at the Yacht Club:

“The Sheridan Prize shall be sailed for annually on the last Saturday in August, unless otherwise re-scheduled or re-sailed at the discretion of the trustees. The race shall be sailed in One Design Class A Scows, as defined by the National Class A Scow Association. It is open only to yachts whose owners and skippers are members in good standing of the Lake Geneva Yacht Club and are eligible to race under its Bylaws. The race will start at the Yacht Club with the fleet sailing a windward course, if possible, to either Fontana or Lake Geneva, then to a mark at the other end of the lake, and then back to the Yacht Club to finish. The time limit for the first yacht to finish is six hours. A single boat starting and completing the race within the time limit constitutes an official race.”

Over the years, in the interest of ensuring a good contest and respecting tradition, the trustees have introduced amendments to the Trust Agreement and revised and clarified various aspects of the regulations governing the race, such as the course, the time limit, and the competitors. The 2013 statement from the trustees reiterates earlier decisions and defines the class of boat as one that complies with the class, sail measurement, and hull measurement rules of the National Class A Scow Association, as must all ILYA-sanctioned Class A Scows. As to competitors, the 2013 statement from the trustees includes both owner and skipper – past regulations only mention owners – and aligns its language about their eligibility with current LGYC Bylaws.

The Sheridan Prize race, held with few exceptions every year since 1874, is unusual in that trustees govern the event and its trophy and, as stated in the 1895 yearbook, “control all questions relating to the prize.”  The first trustees were George L. Dunlap, General Superintendent of the Chicago & North Western Railway, and Nathaniel Kellogg Fairbank, first commodore of the Yacht Club and a prominent Chicago industrialist. (For more on the history of the Sheridan Prize and its winners, visit the Virtual Trophy Room on the Yacht Club’s web site.)