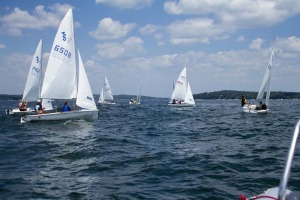 This year’s Club 420 National Championship Regatta proved once again to the sailing community that there really is nothing quite like getting out on the competitive waters. Despite having a few days that, at times, lacked adequate wind conditions, the regatta wrapped up on Saturday with a pair of thrilling races.

Our very own Mary Claire Kiernan, a GLSS instructor, captured a second-place finish when it was all said and done.

After months of intense anticipation and preparation, sailors from all over the nation traveled to the Lake Geneva Yacht Club last week to compete in one of the largest regattas the Midwest has to offer. Kiernan, who grew up sailing on Lake Beulah, managed to edge out the vast majority of her competition with the help of her Lucy Wilmont crew. Their victory didn’t come without a few challenges provided by our beloved Mother Nature.

A few races throughout the regatta were marred with a lack of adequate wind, and many of the sailors described the wind conditions over Lake Geneva during these particular races as extremely “patchy.” In any sailing competition, reasonably distributed wind is important in ensuring that all those who compete have a fair shot at navigating the waters. Inconsistent wind is simply considered to be a part of the sport, and it can make races all the more competitive. All of the sailing enthusiasts that took part in this year’s 420 National Regatta didn’t let the wind spoil the competition, nor the fun of the event. 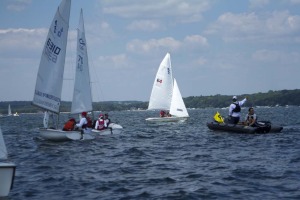 The past week was one that was absolutely rich with excitement, and the LGYC would like to thank all those that took part in such an ambitious series of events, members or not! The GLSS Dinghy Fest, combined with the 420 National Championship, made for a major success for all.For a deeper look into what the Club 420 Nationals had to offer, have a look at our gallery. 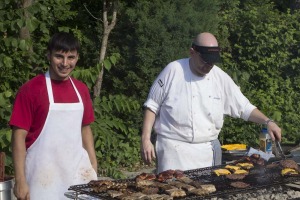 Another congratulations goes out to Mary Claire Kiernan and the Lucy Wilmont crew on their second-place finish, and to all competing sailors for contributing to an enormously satisfying spectacle!

Our next national regatta, the M17 National Regatta, will take place in late August.