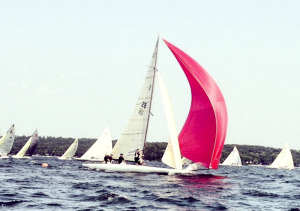 Yesterday Blanchard/Burdick completed the hat trick by winning the A Scow portion of the Big Inland in Okoboji Iowa.  With this win LGYC’s Terry Blanchard and Andy Burdick have successfully defended the A Scow National Title in June at Lake Geneva Yacht Club, also defended the title for the LGYC Championship Series about a week ago, and yesterday prevailed with the A Scow Big Inland Title in Okoboji.

Success was not limited to the Blanchard/Burdick Team, LGYC had 5 A Scows in the Top 8, with Tom Freytag taking third, Anderson/Porter taking fourth, Mike Keefe taking sixth, and Chuck Lamphere securing eighth place.  Tom Freytag’s team brought a bit of youth to the Big Inland with Griffin Rolander on mainsheet, Coye Harrett at #1, Nathan and Allie Freytag and this year’s X Champ Will Huerth.  Congratulations to all who competed .. For the full Results CLICK HERE