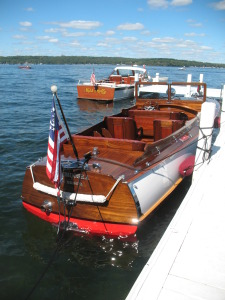 Judges for the event are past commodores Jerry Millsap, Jim Smith (in absentia), and John Zils. They also create the award categories.

Nenemoosha, built by Peter Breen Antique & Classic Boat Company Ltd. in Rockwood, Ontario, and completed in 2007, is fitted out with original 1920s Ditchburn hardware, a 1940s spotlight, a chromed external rudder, custom bucket seats, a 1934 Chrysler Straight Eight engine, and a 100-year-old steering wheel, probably from a Ford Model T. The word Nenemoosha means sweetheart and is an endearment used in Longfellow’s The Song of Hiawatha. 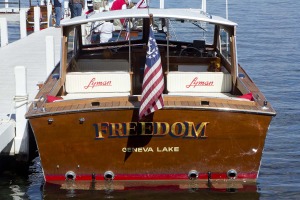 The runner-up title was shared by two recently restored 28-footers: Jean Marie, a 1997 Streblow Cuddy Sport owned by John and Michelle Simms, and Freedom, a 1966 Lyman Sportsman Hardtop (the hardtop is teak) owned by Andy Kubicsko and Robin Randolph. Freedom was the last 28-foot boat built by the Lyman Boat Works Company. The 10-boat fleet this year also included the historic 40-foot displacement-type motor launch Denebola, built by Great Lakes Boat Company of Milwaukee in its Chicago yard in 1929 as Ishkoota for Commodore Henry H. Porter. She was bought and renamed in 1940 by Dr. Will F. Lyon. At the helm this year was Dr. Will’s son Dr. Edward Lyon with his son, Dr. Will’s grandson, Dr. Steven Lyon as crew. Another crowd pleaser was the 30-foot steel-hulled Pink Hour, an import from Lake Tahoe owned by Robin and Peter Mueller. A replica of an Edwardian 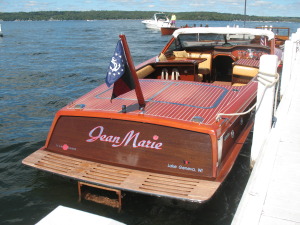 fantail motor launch, Pink Hour was built in 1980 by Millerick Brothers Boat Works and restored by a previous owner who found her in the woods on a California estate.When he could locate period fittings, he used them. Originally steam powered, she now runs on a three-cylinder 20-horsepower 1943 Easthope gas engine. Stampede X, a 22-foot Star-boat owned and restored by Brian Buzard, was the show’s lone sailboat entry. Her sail number is 3040, and she was built in the early 1950s by Skip Etchells at the Old Greenwich Boat Company in Connecticut.

After the judges reviewed the boats along the pier, participants and guests had lunch on the club’s upper deck, boat owners received their awards, and the fleet cruised from the Yacht Club to Black Point, where Flagship fired her cannon in a salute to the late Dr. Edward S. 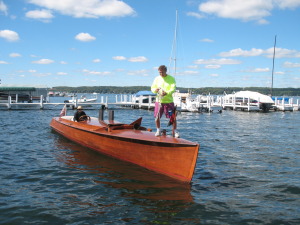 Petersen, the Yacht Club’s Member Number One for more than two decades

The Chatterbox Trophy, a silver vase now 100 years old, started life at LGYC in 1913 as the High Speed Boat Trophy. It was won that year by Commodore Marquette A. Healy driving Mrs. Healy’s 21-foot motorboat Chatterbox. In 1985, the trophy resurfaced in an Illinois garage sale, was returned by the buyer to the Yacht Club, became the Healy Trophy from 1986 to 1972 for the MC fleet championship, and in 2010 was renamed and reassigned by the Board of Directors for use in the Annual Wooden Boat Show. (For more about Chatterbox Trophy history see the online Virtual Trophy Room entry under Special Awards.) 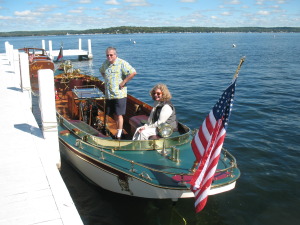 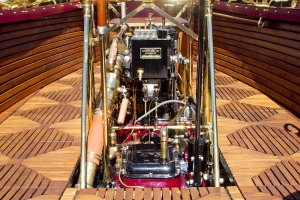 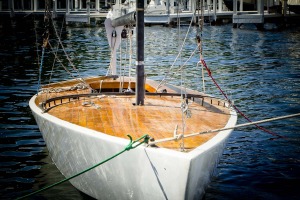