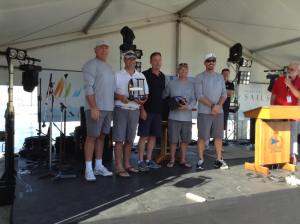 The Australian Open was part of Geelong’s annual Festival of Sails, which started in 1844, helps celebrate Australia Day weekend, and is Victoria’s oldest ongoing sporting event. This year the festival attracted more than 350 boats in 14 divisions and thousands of people for on-the-water and shoreside activities.