Monroe Melges celebrated her birthday a bit early this year when she won the Melges 17 National Championship held at Gull Lake Country Club on Gull Lake, Michigan, August 8-10. She will be ten at the end of the month. Monroe set the pace at the regatta by winning races one and two in Zenda Express then followed up with 3-3-(8)-5-1-1-1 finishes for 16 points, three points ahead of Tom Munroe of Muskegon, Michigan, Melges 17 Western Lake Michigan Yachting Association champion. In third overall was Sean Fidler of Royal Oak, Michigan, with 20 points. Seventeen boats competed in winds that ranged from about 2mph to 12.

Harry Melges III crewed for his daughter. He was also top crew in 2013 when he raced with his son Harry IV at the Melges 17 National Championship on Geneva Lake.

This summer, Monroe Melges was a student in the Reachers Class at Geneva Lake Sailing School and competed in a number of different boats during that program. She also sailed in an O’pen Bic and crewed on E and C scows and in Class X. She gave the Melges 17 a try after last year’s Inlands and loved it. The 2014 National Championship, however, was the first time she raced one as skipper.

Monroe will be a fifth-grader at Fontana Elementary School this fall and plans to campaign an X-boat next season with her cousin Mya Burdick. 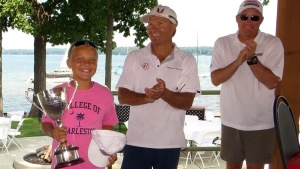