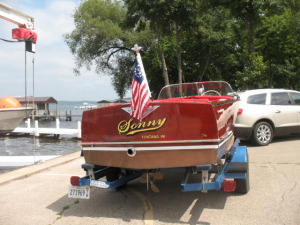 Sonny, winner of the Best First-Year Entry Award at last year’s event, was built in 1956 at the Century Boat Company, then in Manistee, Michigan. She was restored to her present condition in 2012 and 2013 after being bought by a member of the Temple of Reconstruction group in Mt. Dora, Florida. When LGYC’s David Williams saw the boat at the 2013 Mt. Dora Show his message to the Larsons was direct and to the point: “This is the boat you’ve been looking for.”

John Larson’s work on Sonny since then has been mostly mechanical. He repaired, rewired, and reinstalled the spotlight; returned the cooling system to specification; replaced the ignition system; and adjusted the carburetors and timing. He also installed a pair of air horns and connected them to the horn ring on the wheel, which is original.

After the awards, onlookers were treated to a demonstration aboard another 2014 entry—a handsome wooden 16-foot sailing canoe that is a replica of the famous 1900s racing boat Tomahawk. To everyone’s delight, owners Peter and Robin Mueller invited 2013 ILYA Class X Senior Champion Will Huerth, 17, to take her out for a spin.

“It was a great experience,” said Will, who spent this past summer as an instructor at the Geneva Lake Sailing School and as crew on LGYC scows. “I had never sailed a boat quite like that,” he said, “and at first I was really nervous because I thought it was going to break. They cast me off on a broad reach right to Williams Bay…and the boat wanted to flip over every second. On the way back, I got a huge puff and flipped right in front of everybody. Luckily, I quickly hopped over the side onto the centerboard and dry-tipped it. Being young and athletic,” he said, “really helped my cause.”

The Chatterbox Trophy is equally resilient. A silver vase that celebrated its 100 birthday last year, it started life in 1913 at LGYC as the High Speed Boat Trophy and was won by Commodore Marquette A. Healy driving Mrs. Healy’s 21-foot Chatterbox. The trophy disappeared after that victory then resurfaced in 1985 at an Illinois garage sale, and its buyer returned it to the Yacht Club, The following year it took on new life as the Healy Trophy for the MC Fleet Championship, but was replaced for that purpose in 1992 by the even older Chalice Cup, and again disappeared. In 2010, Trophy Committee Chairman Bob Pegel found it in the club’s basement, and the Board of Directors re-named and re-designated it for top prize at the Wooden Boat Show.

The Wooden Boat Show Committee for 2014 was Bill Bentsen (chair), Jerry Millsap, Robin Randolph, Diane Sherin, and David Williams. Each owner of a participating boat received a box of LGYC glasses, much applause, and an appropriate award from the judges as listed below.

Chatterbox Trophy for Best in Show

Close But No Cigar Award