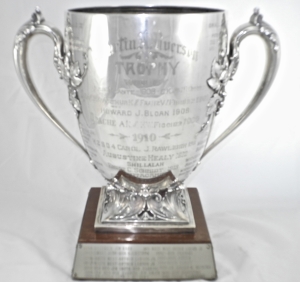 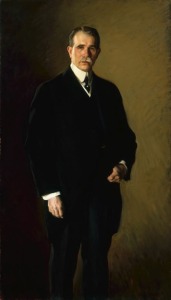 Martin A. Ryerson portrait by Louis Betts, 1913 (Courtesy of the Art Institute of Chicago)

In January 1906, the year the Lake Geneva Yacht Club moved into its Cedar Point home, Martin Antoine Ryerson (1856 – 1932) donated a handsome sterling silver cup for competition in the club’s new class of 18-footers, listed in the yearbook as Class D. Within a few years, as permitted by the deed of gift, the Yacht Club awarded the trophy to the growing Class C fleet, where it remains today. Mr. Ryerson, a life member of the Yacht Club, is not included among the 12 Class D owners of record in 1906, but his name occupies a prominent position in the steam yacht section of the power fleet of the time. He was the owner of the 73-foot steel-hulled Hathor, which he built in 1898, and which one can assume graced the edges of the race course on a regular basis. Hathor’s second, third, and fourth owners were LGYC members Garnet W. McKee, Alben F. (Peter) Bates Jr., and, from 1972 to 2004, William H. Sills III, commodore in 1988 and 1989, who used the boat frequently for Yacht Club and Sea Scout events. Today, thanks to an extensive restoration by her fifth owner, Larry Larkin, Hathor is again active on Geneva Lake and provides an ideal platform from which to enjoy the annual Ryerson Trophy race. (Larry and Sue Larkin are the parents of LGYC member Lieutenant Commander Patrick Larkin, United States Navy.)

Martin A. Ryerson was a remarkable and accomplished individual who directed his intellectual and philanthropic energies to numerous cultural and civic causes in Chicago, most particularly to higher education and the world of art. He graduated from Harvard Law School in 1878 and practiced law before joining his father in the family lumber business. Mr. Ryerson was among the founders of the University of Chicago and one of its original trustees, serving as board president for three decades; he was a founding trustee at the Art Institute of Chicago, a valued board member until his death, and a major donor to its collections; he was a trustee and officer of the Field Museum of Natural History from its earliest days. The Ryersons gave most of their American, European, and Asian art, sculpture, and textiles to the Art Institute, and Mr. Ryerson endowed the Art Institute’s library, which bears his name. At the Lake Geneva Yacht Club in 1906, G. K. and James R. Offield were the first winners of the Martin A. Ryerson Trophy; in 2012, the winner was Erick Youngquist, the Class C season champion. Is your name on the Martin A. Ryerson Trophy? To find out, visit the Virtual Trophy Room by clicking here.