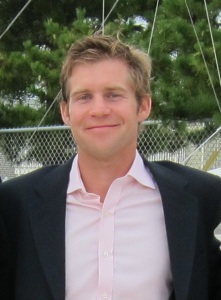 For the second year in a row, the National Class E Scow Association has awarded both the National Ranking Championship and the Road Warrior Championship to Vincent Porter (I-2). The National Ranking title is awarded on the basis of a competitor’s best three regatta series points in the year, which in Vincent’s case was his first at the July ILYA Invitational at Pewaukee, his third at the August ILYA Annual Regatta at Okoboji, and his second at the September Class E Scow National Championship at LGYC. The Class E Association computed its 2013 rankings on regatta results for 203 skippers. Peter Strothman (I-9) was second in the rankings. The Road Warrior title is awarded to the skipper who accumulates the best place overall, counting all the regattas attended during the year.