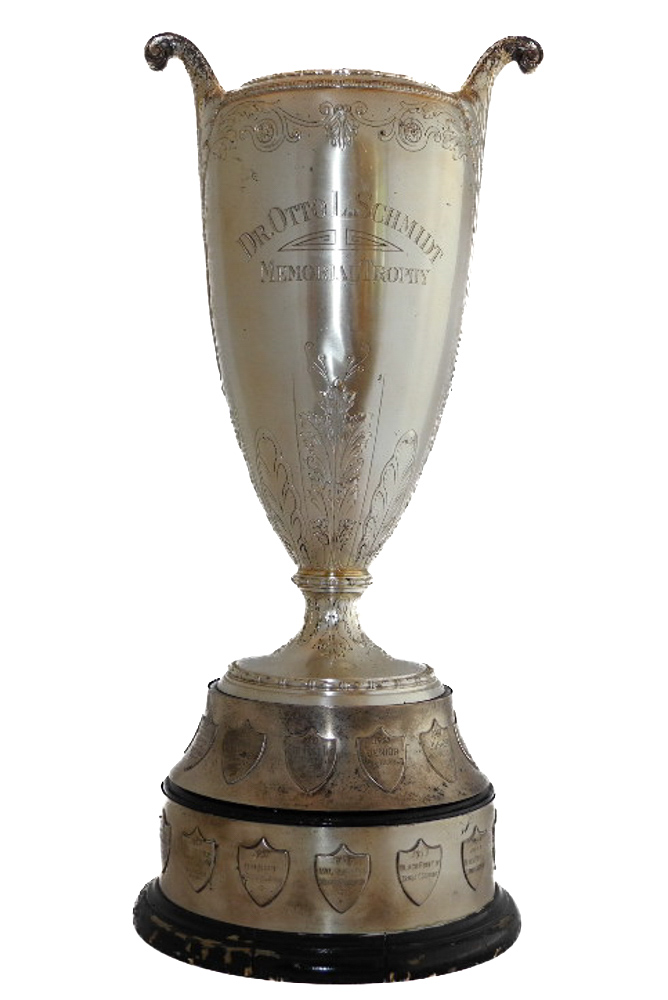 The Dr. Otto L. Schmidt Memorial Trophy race is an event for Class A established in 1936 to honor Dr. Otto Schmidt (1863-1935), who contributed throughout his life to the Yacht Club’s well-being as a trustee for many decades, commodore from 1907 to 1909, and club historian. He was president of the Inland Lake Yachting Association for 22 years. Dr. Schmidt’s successes on the water include the Class A title at the 1913 ILYA Annual Regatta and eight Sheridan Prizes in his A-boats Black Point and Senta. The perpetual trophy, donated to LGYC by members and friends, is a handsome sterling silver urn that has a double-tiered wood base with silver bands embossed with shields for the winners’ names. The names of winners from 1964 to 2004 are engraved on the back of the trophy, and the names of the winners since then are engraved on a plaque that the winner retains for the year. A Memorial Resolution honoring Dr. Schmidt is included in the minutes of the LGYC Annual Meeting of August 31, 1935. “To the sport he loved,” it says in part, “he brought a rare quality of leadership; giving unselfishly of his energy and resources; carrying on where others faltered.” Before the inaugural race on July 4, 1936, Bruce E. Adams, Memorial Committee Chairman, presented the new trophy to the club secretary Ernst C. Schmidt, Dr. Schmidt’s son. At that meeting a motion was made and passed that the course for the Schmidt Memorial Trophy race would be from the Yacht Club to Buttons Bay, Fontana, and return, or vice versa, with races starting to windward if possible. In 2011, the Board amended the criteria, and the trophy is now awarded to the best-scoring boat in four races held over two scheduled Series A race days, with a third scheduled Series A race day as a makeup. The first four completed races on the scheduled days are scored for the trophy. A minimum of three races must be completed. The skipper and crew of the winning boat receive commemorative pins.