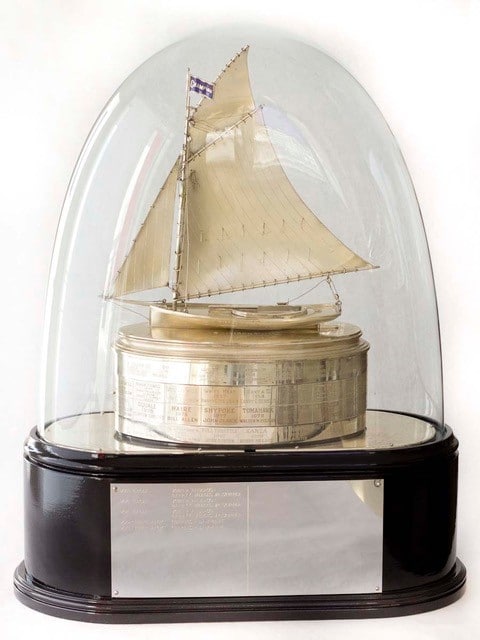 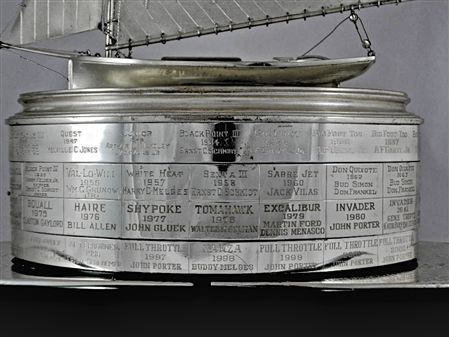 It has been called the great race of our club. From the start, even before there was a beautiful trophy or an official Yacht Club, the Sheridan Race generated enthusiasm among competitors, boat owners, and the townspeople from around Geneva Lake who lined the shore. The colorful story of this event begins on August 31, 1874, when Lieutenant General Philip H. Sheridan, the Civil War hero then stationed in Chicago, visited Lake Geneva. To celebrate the occasion, his hosts and friends planned a regatta in his honor and collected $200 for a trophy. Seven boats—they were known as sandbaggers—competed in the Sheridan Race that day, and the winner on corrected time was the 21-foot topsail sloop Nettie, sailed by Billy Woods and owned by Julian S. Rumsey, a successful grain merchant in Chicago and that city’s former mayor. In the year that followed, Chicago silversmiths Giles, Brother & Company created a handsome trophy, a 10-inch silver model of the Nettie on a flat oval surface that is inscribed “Sheridan Prize Sailed for Annually on Geneva Lake the Last Saturday in August.” These words are surrounded by the engraved names of the winners, which continue on the base and on rows of silver bands added over the years.

To ensure responsible management of the event and its trophy, the General’s friends drafted a Trust Agreement and appointed trustees to oversee and “control all questions relating to this prize.” The first trustees were George L. Dunlap and N. K. Fairbank. (The LGYC centennial book also includes General Sheridan’s host, Charles Wilson, as a trustee.)  In recent years, the current commodore and two members serve as Sheridan Prize trustees.

Initially, the only yachts eligible to compete for the Sheridan Prize were the open sandbaggers on Geneva Lake. At a meeting of the Yacht Club on August 21, 1899, with the sandbagger type on the wane, the members, “with the consent of Mr. N. K. Fairbank, Trustee,” changed this requirement to read that “All yachts competing for the Sheridan Prize must be eligible to Class A of the Inland Lake Yachting Association.” The boats also had to belong on Geneva Lake. At a Yacht Club meeting on April 26, 1952, the officers and trustees agreed that the race “is to be open only to yachts belonging to Bona Fide Regular Members of the Lake Geneva Yacht Club.” The Trust Agreements from 1936 and 1969 state that “There must be a race once each year for Class A yachts, same to be for the Sheridan Prize, from the City of Lake Geneva to Fontana and return with a time limit of five hours. The race, if possible, should be sailed on the last Saturday of August each year, subject to the approval of the Trustees.” There have been other adjustments to the terms. From 1975 to 1978, for example, when the A fleet was all but dormant, the trustees invited Class E boats to race. The course has varied, too. Some regatta announcements stated that the race for the Sheridan shall “every alternate year, start from the City of Lake Geneva.” In March 2013, the Sheridan Prize trustees added an amendment to the 1969 Trust Agreement covering the Sheridan Prize as follows: “The Sheridan Prize shall be sailed for annually on the last Saturday in August, unless otherwise re-scheduled or re-sailed at the discretion of the trustees. The race shall be sailed in One Design Class A Scows, as defined by the National Class A Scow Association. It is open only to yachts whose owners and skippers are members in good standing of the Lake Geneva Yacht Club and are eligible to race under its Bylaws. The race will start at the Yacht Club with the fleet sailing a windward course, if possible, to either Fontana or Lake Geneva, then to a mark at the other end of the lake, and then back to the Yacht Club to finish. The time limit for the first yacht to finish is six hours. A single boat starting and completing the race within the time limit constitutes an official race.”

The owner of the winning yacht receives a three-inch replica of the Nettie, and crew members receive commemorative pins. After the 1894 race, the winning crew received gold scarf pins, and the second- and third-place crews received cash prizes. 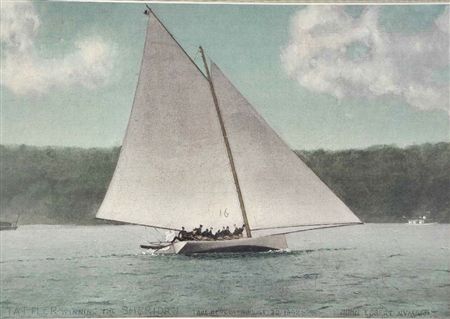 Tattler winning the Sheridan Prize in 1892