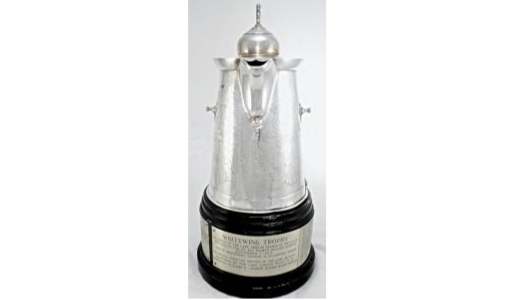 On September 3, 1883, Samuel W. Allerton’s Whitewing won this ornate silver coffee server after a competition that was “sailed for by all yachtsmen on Lake Geneva.” The Lake Geneva Chapter of the Grand Army of the Republic (G. A. R.) presented the trophy for the event, but this was only the beginning of its unusual history. Additional engraving states that the trophy was “Recovered from the depths of the lake in 1974. Restored by Lake Geneva Yacht Club. Dedicated to Class C [in 1982].” The Whitewing Trophy is awarded to the skipper who finishes in overall second for the season in the championship series. Winners’ names are engraved on the base. [Also see Class E, Folly Prize.]