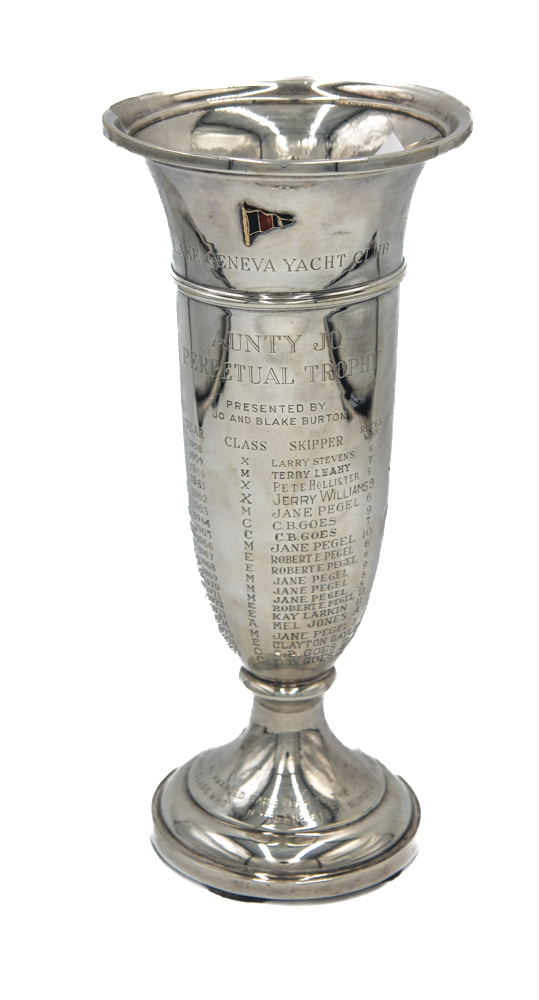 In 1958, Mr. and Mrs. Blake Burton donated a sterling silver vase to the Yacht Club to be awarded each year to the skipper who wins the most races during the season in any class in which seven or more boats competed. (In early yearbooks, the Aunty Jo Perpetual Trophy is called the Skipper’s Trophy.) In case of a tie, the trophy is awarded to the skipper in the class in which the largest number of boats participated in a championship series. Mrs. Burton, who was called Aunty Jo by members young and old, served the Yacht Club as executive secretary, as a trustee and director, and for many years as a valued member of the race committee, for which she received the Dr. and Mrs. Will F. Lyon Trophy in 1969 and 1979. The 1978 LGYC Yearbook was dedicated to her, with text stating that she “has probably spent more time on the Flagship than anyone and helped teach others to set the courses, fire the guns, and record the results. Her cheerful smile and willingness to help have made life at the Lake Geneva Yacht Cub more pleasant for all of us.” In 1981, Jo Burton received the Marie Kramp Award for Outstanding Service to the Yacht Club. Listed below are the names of the winners of the Aunty Jo Perpetual Trophy and the classes in which they competed.

With the 2020 racing season and subsequent racing seasons, is awarded each year to the skipper who wins the most races in his or her fleet’s Championship Series (Series A).  Eligible races for the Aunty Jo Trophy are limited to those in which seven or more boats in a single class compete, and each skipper’s record of wins for this purpose is limited to Series A competition within a single class.  In case of a tie, the Trophy is awarded to the skipper in the class in which the largest number of boats participated in their Championship Series.