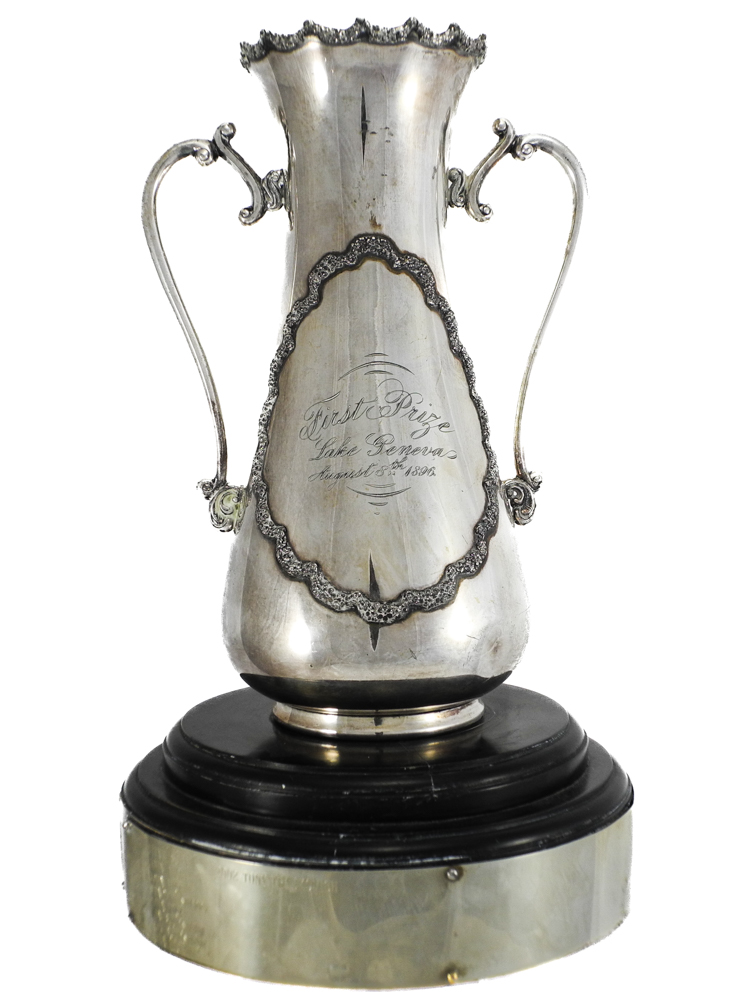 The Chatterbox Trophy is a silver vase that started life as a powerboat trophy, retired from competition, returned to become the MC championship trophy, disappeared, and today is the much-admired prize for the Yacht Club’s annual wooden boat show for the power fleet. In 1913, the trophy was called the High Speed Boat Trophy, and it was won by Commodore Marquette A. Healy at the helm of Mrs. Healy’s 21-foot motorboat Chatterbox. (Marquette Healy was LGYC commodore from 1912 to 1921. He also raced Class A and Class B sailboats and was the winner of the Sheridan Prize in 1912.) In 1985, the trophy appeared in an Illinois garage sale, and its thoughtful buyer returned it to the Yacht Club. In 1986, the Board of Directors named it the Healy Trophy and assigned it to the MC fleet for the season championship, with the understanding that a more appropriate trophy might replace it. That happened in 1992, when Martin and Hilary Ford donated the even older Chalice Cup to the MC fleet. The Healy Trophy was relegated to the basement, but when it surfaced in 2010, the Board of Directors renamed it and designated it as the first-place trophy for the Yacht Club’s annual Wooden Boat Show, the winner to be determined by a special committee. If the Yacht Club has no power fleet event scheduled, the chief race officer may award the trophy to a Yacht Club member performing outstanding service as a spectator boat.